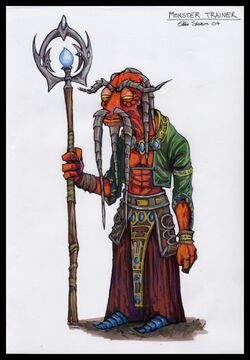 The Warrior Trainer is an inhabitant of the Enchanted Kingdom of an unknown race who trains elf soldiers in advanced combat. In the beginning of the game, he provides a tutorial on the controls for Kameo's abilities.

The Warrior Trainer carries a staff that allows him to summon and unsummon a wide range of living and non-living objects and creatures including but not limited to trolls, fire, pumpkins, beetles, magmites, elixirs, and fruit.

He is a patron of the Pumpkin Cafe at the Forgotten Forest Glade, and enjoys visiting with the soldiers. After Yeros' rescue, he appears there at the same time as Kameo to direct her and Ortho to the Ogre's Swamp to find Thermite. He will initially not recall how to get into the swamp. However he will remember and summon the Magmites they need when Precious Memories, his favourite song, is played on the Pumpkin Cafe's Jukebox to remind him.

He is a frequent visitor to The Lost Ruins that exist under the Badlands. Kameo can visit him there and train with his challenges for 10 Runes (20 Runes for Elemental Evil). If she wins his challenges, he may reward her with Elemental Fruits each time a game is completed for the first time. The games can be repeated for fun at any time.

Each ruin has different timed challenges. Pumpkin Panic involves destroying at least 75 pumpkins in under a minute. 200 pumpkins will earn a Fruit. Beetle Brawl has the objective of killing at least 120 Beetles in under a minute. 150 Beetles killed will earn a Fruit. Troll Trouble has the objective of killing at least 40 Trolls in one and a half minutes. The Ruin that contains Troll Trouble also contains Elemental Evil.

Elemental Evil is the most complex of the challenges. It costs 20 Runes as opposed to the other challenges' 10 Runes. It has the objective of killing at least 40 trolls in five minutes. During the first wave, 10 Plant Trolls will be summoned. When killed, a second wave of Fire Imps is summoned. The third round will have 10 Rock Trolls, and the fourth will have 10 Ice Trolls. If the fight continues to a fifth round, there will be 10 Water Trolls. The sixth round will consist of 10 trolls; two of each of types faced in the previous five rounds. Any further rounds will have the same trolls as the sixth.

Community content is available under CC-BY-SA unless otherwise noted.
Advertisement